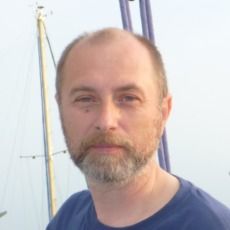 6 people
· 3 cabins
· 6 berths
· 1 bathroom
731 people have viewed this catamaran in the past week.
With or without a skipper
Book this boat with or without a captain
Ilya is a Super Owner
Super owners are experienced boat owners who have received positive reviews and are committed to providing services of the highest quality.
Booking conditions
This boat can be chartered any day of the week, with no minimum duration
Cancellation policy
Cancellation conditions Moderate
Moderate: 70% refund up to 10 days before arrival, excluding service fees and commission. Learn more

Important notice. 2022: Dear customers, Due to personal reasons, "Hippo" will be not available for rent in 2022. I hope it will be ready for renting again in Summer 2023. The boat can be rented with a skipper only, since no PEER-TO-PEER CHARTER insurance is available via "Click and Boat"for this old catamaran. The boat has only third party insurance option. I will stay aboard of "Hippo" to accompany you as a skipper in terms of "Co-navigation" or "Accompanied sailing". At the same time, you can practice with navigation and piloting if you wish so. 2021: I am happy to inform you that after long break due to Covid-related travel restrictions, "Hippo" will be available for renting again! During this winter I have done overhaul of starboard motor. In 2021 I will keep my caravan car in Auray (see the photo in Description). So, if you would need a place to stay for short time before and after sailing (or when the weather is not good for sailing during your rental time) you can use it for 30 €/day. If you would like to rent caravan car for travelling the price is on agreement. Also in 2021 I will bring to France my photo gear and can organize sailing photo session for you to have a good memory of your trip. Welcome aboard! I bought this catamaran in 2013 and we use it for family cruising every Summer. Cumulatively 1609 NM - long trip from Kröslin (Germany) to Auray (France) was performed during vacations in 2013-2018. Catalac 9m "Hippo" is a safe cruiser boat proven by time. The model was designed by John Winterbotham of MG Duff LTD in 1968 and has a similar reputation among multihull cruisers as VW Bus among the fans of camper cars. It is not designed to reach speed records but it is very strong, seaworthy and comfortable boat perfect for family cruise. It is very safe model of catamaran. Accordingly to information from the Internet, no cases of capsize were recorded for Catalac catamarans, most likely due to the lacking of the keels. Deep "V" shape of the hulls plays a role of the keel and prevents leeway, but lets the boat to "slide" before it will capsize. "Hippo" is equipped with Main sail, Genoa on furling and Gennaker. "Hippo" has a close steering cabin, 6 berths in 3 sleeping areas and saloon which can be transferred into "king-syze" bed. It can comfortably accommodate a family with two kids (in saloon) + family couple (in double cabin) + one person (in single cabin). One extra berth is also available mid starboard hull, but it is not very comfortable and usually is occupied by suitcases, bags etc. There are many lockers inside the cabin and in cockpit with plenty of space. Catalac 9m has large (about 2x4m) cockpit and Bow sundeck (with no trampolines). Cockpit is equipped with bimini top and plastic cockpit enclosure (for anchorage at rainy day). Inflatable boat with 2,5 outboard motor is included into the price. There is an equipment for snorkeling for 4 persons and 2 sets of neoprene suits (7+5mm) of L and XL size. I have also 2 sets of diving gear and diving compressor on "Hippo". However, if you want to go for diving we should discuss it separately. Two sets of fishing gear are also available. 2 bicycles are available for those who like to explore the land around (no extra payment). "Hippo" can be even used as "floating hotel" to spend some time in this beautiful and rich with culture area of France. Bed linens + towels are available for 10 € per person. Final cleaning 50 €. Boat is located in Auray at Gulf of Morbihan in Southern Brittany (France). The Gulf of Morbihan has been described as one of the most beautiful bays in the world. The are other true "gems" of nature located around, like: Belle Île, Île-d'Houat, Glénan Islands. From Auray it is possible to perform a 3 days-long "One Hop" to cross the Biscay and reach the Spanish coast. If you are interested in renting this Hippo, please contact me via Click and Boat messaging. See you soon!

Translate
Of which 7 are in English

Great Boat, Great trip & Ilya is a very nice and caring person, always available on the phone when questions or tips concerning the sailing area are necessary.

We had the boat for one week in Morbihan and also went to Belle Ile. The boat is old but very confortable for a family trip. The boat owner, Illya, is punctual, very helpful & accommodating. Lots of equipments like diving, snorkeling, bicycles etc... We will rent again.

First, we had excellent support from Ilya; far beyond "welcome and reception". We nominated a bareboat charter, but agreed to his suggestion that he come aboard for the first day, and it was a good decision. He helped us get acquainted with the boat. From then on, he provided constant support by phone. The big positive feature for me was the battery power management system on Hippo. Although in our week (early August 2019), the max temp was not much above 20, so not an extreme test), we had no problems keeping the fridge (a good size) cold. In my experience of bare-boating, the fridge is a problem more often than not. As well as battery isolation (not so unusual), Hippo has solar panels and a wind generator. Navigation and trip planning in the Gulf of Morbihan is a challenge, due to the tidal range. This is why we chose Hippo, a catamaran with a draft of only 0.8m. Having two motors adds an extra dimension to potential manoeuvrability, but in retrospect, I should have sought an opportunity to add to cat twin-motor experience before starting our holiday. Of course, the alternative would be to have Ilya aboard as captain. Hippo is equipped with all necessary navigation equipment. The Navionics chart plotter was particularly useful, especially since Ilya had retained recent track history. These "purple tracks" provided an invaluable back-up for our conventional navigation. The 4/5 score for compliance largely relates to fumes from the starboard motor, but Ilya plans to rectify this. Our 4/5 score for comfort accommodates the conventional marine toilet on Hippo, but my recall of energy-draining modern head systems (and consequent problems with refrigeration), not to mention the imperative "call-out" help with head systems get clogged with toilet paper, implies the big advantage of simple, old technology! Similarly, a battery-powered anchor winch would be nice, but it's even better not to risk draining the battery. Given the availability of berths on pontoons and moorings in the area, we only had to anchor once in our solo period. Likewise, we learned how to accommodate for the lack of hot water; not really an issue in summer! Most of all, any inconveniences were more than compensated by the price of renting Hippo. Given the opportunity, we would take Hippo again.

We stayed on Hippo for 5 days and sailed the area of Brittany. Ilya stayed on board with us and lend a hand where it was required. In general he is a very caring host and tried to fullfil all our wishes. He also is an excellent cook and nice person to spend time with. The gulf of Morbihan is a beautiful area but can be quite challenging due to ride and currents. Hippo is a nice boat that can easily accommodate 5 people. We are already thinking about renting hippo again (in a warmer time of the year).

Our 3-day trip with Ilya on the catamaran Hippo has been one of highlights in the 3-weeks we have toured France so far. Our cruise was really unforgettable, made so by Ilya's expert planning and the sterling level of service he provided. The unique sailing vessel, and its amazing seaworthiness, supported this cruise excellently. Hippo's amenities (galley, "lounge", berthing, deck) were well suited to our needs. Ilya's professionalism and friendliness qualities are amongst the best we've seen in chartering. We chose an early season sail with chill temperatures, and with some unpredictable weather and our demanding tour schedule, Ilya made our trip work flawlessly. His flexibility on the schedule ensured we would enjoy the experience immensely. Highly recommend Ilya and his Hippo for experiencing the French coast in a way most cannot.

You will only be charged if the request is accepted

731 people have viewed this catamaran in the past week.
Charter price
Service Fee and Taxes
Discount offer
Promotional code

-
-
Edit
Select your dates
Rent by the hour
Ask for an hourly quote from Ilya.
Please note: your details will be forwarded to the owner after the yacht has been booked on Click&Boat. Meanwhile, you cannot exchange your contact information.
Your message
Make sure to specify in your message: