Hire a boat in Marmaris 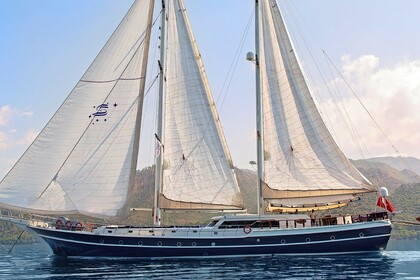 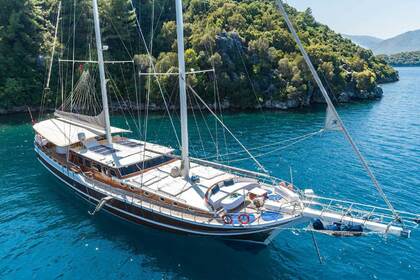 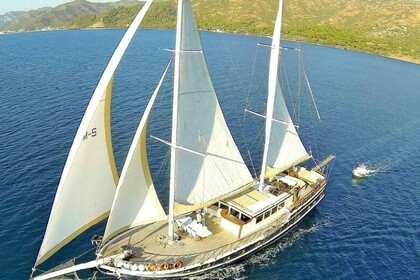 Traditional Turkish Gulet for 16 Guests Onboard
(2007) 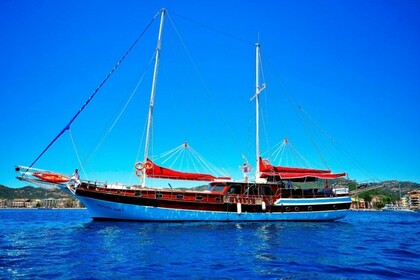 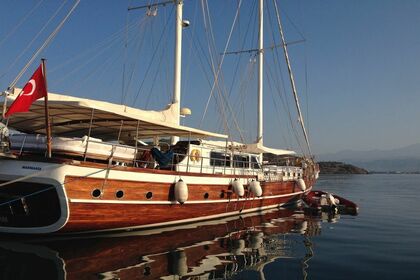 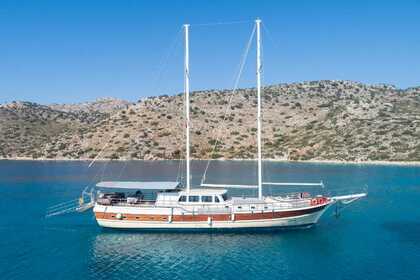 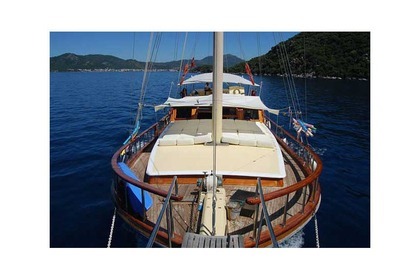 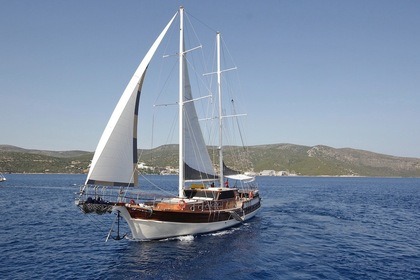 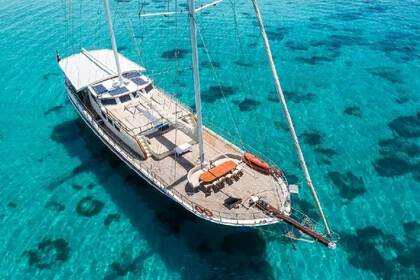 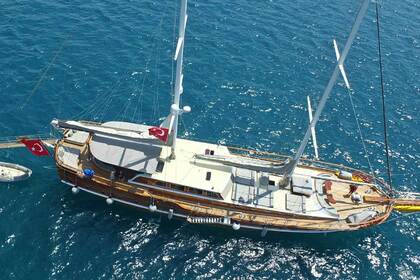 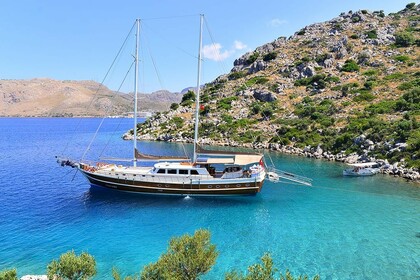 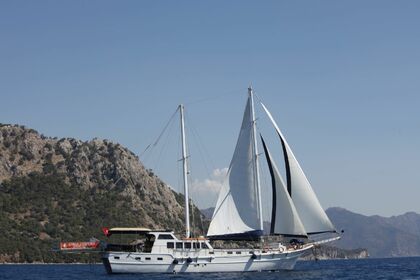 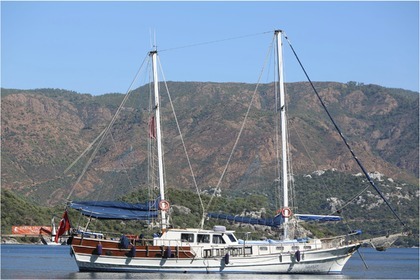 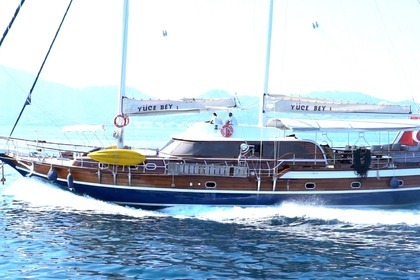 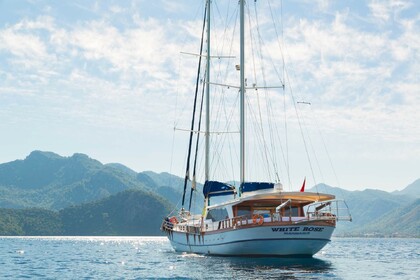 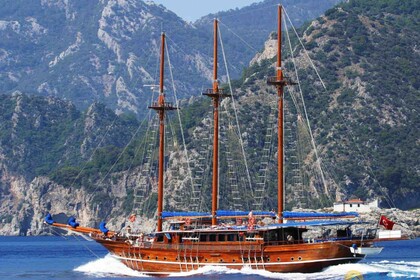 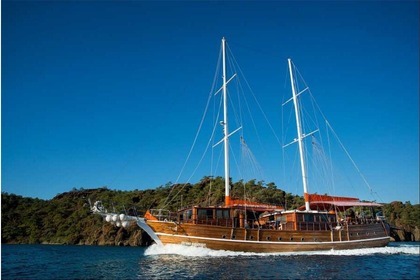 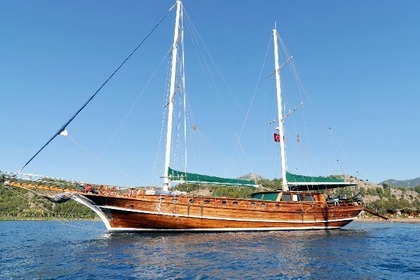 Where to sail in Marmaris?

The Mediterranean coast offers an abundance of sailing grounds: set sail along the Turkish coastline and explore the Ottoman heritage. And don't forget to anchor your boat in the bay of the neighboring city, Bodrum, and enjoy the lively beaches and nightlife. And of course you can also hire a boat in Bodrum on our platform. Or if your heart desires a change, go to the Greek islands of Rhodes or Crete.

If you are planning to take a real cruise, you will certainly appreciate the possibility to stay on board instead of staying in the usual hotels in Marmaris and other popular resorts in Turkey. So you can even stay in several different countries on the same ship, for example: how about heading for the beautiful pine-covered Italian coast? Puglia or Venice or perhaps Sicily? It's up to you and only you!

What to see and do in Marmaris?

Marmaris is home to its picturesque bays and a port of incredible beauty, where many quality sailboats tend to dock. It is a city that preserves the heritage of the Ottomans: architecture, art, traditions, cuisine - all this and more awaits the curious traveler.

Of course, as in many popular coastal towns, one can relax on the comfortable beaches, surrounded by pine-covered cliffs, and then go out to explore the nightlife - there are plenty of bars, clubs and restaurants, loved by locals and tourists alike.

Holidays on the beach

The first thing that comes to mind when one thinks of Marmaris is the magnificent beaches offered by its beautiful nature. In fact, many tourists come to Turkey just for the beach vacation. Marmaris is one of the most popular Turkish beach resorts. Icmeler, is one of the cleanest beaches in the area with crystal clear waters. Perfect for diving and snorkeling enthusiasts who have come to see octopuses and corals in their natural habitat.

Start your way in the old city, stroll through the narrow streets and admire the historic buildings, built in the 16th century, when the rule of the Ottoman Empire was greater than ever. Today these buildings are restored and are used as stores, bars and restaurants. However, you can wander the streets and imagine how people lived and thought a few centuries ago, and feel what the atmosphere of this era was like.

Dated from the 3rd century BC and created by Herodotus, the castle has been well preserved over the years. Yes, it has been rebuilt several times and the look of the castle, which was once admired by Sultan Suleiman the Magnificent himself, has come to the present day in one piece. Now it is an open-air museum, which attracts many tourists from all over the world for its unique beauty and energy.

This fountain is something impressive! It is a real light and music show in the heart of the city. It is a dome filled with crystal clear water that becomes a real mirror of water in which tourists can see the projection of the city's landmarks, the national flag and the portrait of Ataturk.

The ancient amphitheater, built in the 5th or 6th century BC, stands incredibly well preserved to this day. Certainly not without outside help, i.e. from UNESCO. But don't rush to call the amphitheater a ruin: several music concerts are still held there.

The city of Marmaris offers us a large bazaar, a beautiful marina and an old castle. The most popular area is central Marmaris, especially the Siteler and Armutalan areas. Here you will find many options for leisure, entertainment, and waterfront restaurants. During your stay be sure to try some traditional Turkish dishes, such as meze, kebab, baklava and kunefeh, which can be found in most local restaurants.

Click&Boat offers you a variety of choices for your trip.

Boat hire in Marmaris with Click&Boat

Marmaris is located in southwestern Turkey, in the province of Mugla and is one of the largest natural ports in the world, where the Aegean and the Mediterranean Sea meet. Surrounded by mountains and forests, it is one of the most popular and largest tourist cities in Turkey.

Coming here and not enjoying a vacation aboard a boat is an unforgivable omission! So let's find out where to hire a boat, what types of boats are available, and most importantly, is it possible to rent a boat if you don't know how to operate it?

Of course, not everyone has a boating qualifications or licenses. However, this is no reason to deny yourself the pleasure of sailing along the Turkish Coast, a kind of Turkish Riviera, which is to be congratulated for its incredible beauty: cozy and picturesque bays, luxurious beaches and refreshing dives.

Thanks to our service, you can add excitement to your vacation. With Click&Boat, you can rent the following boats in Marmaris:

How much does a boat hire in Marmaris cost?

The cost of renting a boat for your cruise depends on the size and type of boat, its capacity, the itinerary and the duration of your rental.

With Click&Boat, the leading boat rental service, you can charter boats with or without skipper.

You will not regret the decision to hire a boat in Marmaris, because in addition to the personalized itineraries and unique experiences, you will also have the opportunity to practice water sports such as snorkeling, water-skiing and diving.

Quite hot in the marina and busy on arrival-Saturday. Luckily early check in was possible. Supermarket in the Marina delivers to the boat.Restaurants nearby, good toilet facilities.

To reset your password, enter your email address and we will send you a link to reset it.