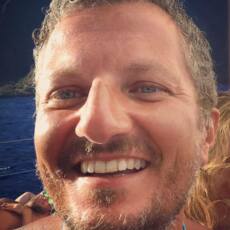 Set sail aboard this splendid catamaran to discover from another perspective some of the most beautiful and exclusive locations in Sicily, the archipelago of the Aeolian Islands! The catamaran is a special boat, an amplifier of emotions, whoever gets on this boat wants to come back ... the Aeolian islands are seven special islands .. volcanic and each one different from the other, fascinating with their colors of sulfur and lava stone .. the skipper is a lover and connoisseur of these places who will show you the pearls of the Aeolian Islands in a nutshell. This Lagoon 380 can comfortably accommodate up to 12 passengers for day trips, while offering 8 comfortable beds in 4 comfortable spacious double cabins as well as an additional guest in one of the two single cabins (the other is for the skipper). The catamaran was completely renovated in 2021 while the engines and sail drives were replaced in January 2020 reaching a power of 72HP. which allows it to reach a cruising speed of over 9 knots. It has 100 square meters of floor space, two comfortable bathrooms, one per hull, a convertible wooden dinette and a wonderfully equipped kitchen as well as an outdoor barbecue. It is also equipped with every comfort, and you can find on board a 15 horsepower tender with a rigid keel, the net between the hulls, a Kayak, a Stand Up Paddle, dinghies, mattresses, hammocks and equipment for snorkeling and fishing tackle. The catamaran is a boat also appreciated for its stability, spaciousness and safety (two independent and separately functioning propulsion elements in addition to those of the sails). We will enter the hidden and precious coves of this archipelago ... in Lipari to the beach of the stacks and the natural arch, to the pumice falls and to the salt pans of White beach, to Panarea in the marvelous Cala Iunco where the remains will be found of a 14th century BC civilization - Bronze Age, perfectly preserved, and Baia Milazzese, and the islets where you can have an aperitif and enjoy wonderful sunsets such as Lisca Bianca and Lisca Nera, Dattilo and Basiluzzo surrounded by Formiche the outcropping rocks, Stromboli, "Iddu", so called by the islanders, with the sciara del fuoco, Strombolicchio and the splendid and uncontaminated Ginostra, Salina con Lingua and its exquisite granitas and the cunzato bread of Alfredo, Malfa, Santa Marina and Pollara ... on whose beach they shot a film with Massimo Troisi , Filicudi, the lobster island, with its Reed rock of volcanic nature and the natural arch where you can taste Sicilian culinary specialties in street food, Vulcano with mud and the beach of Gelsi and the pools of Venus and Alicudi it magical and uncontaminated rock inhabited by fishermen and donkeys. It will be an unforgettable holiday full of emotions (strongly not recommended for the faint of heart); Captain Carlo ... who in his spare time, in winter, plays at being an accountant, has over thirty years of experience at sea with his 49 years of age, and knows how to repair any damage on his boat. A person of pleasant company and multifaceted, she has great psychological skills to involve every member of her crew, being the fundamental catalyst element of the boat. What can I say .... we are waiting for you to spend many goliardic moments together to savor a mix of smells, flavors and postcard images among the waves of the Aeolian Islands, pampered by the wonderful Sicilian cuisine. Hospitality on board is guaranteed! The price of the skipper is not included in the indicated rates: € 200 x day; Galley, fuel and any moorings are to be considered separately (including that of embarkation and disembarkation in Milazzo € 100); Sheets: € 10 per person; Set of three towels (shower, face and host towel): € 10 per person Obligatory final cleaning and gas bottle included: 200 €; And finally, the use of the tender's outboard motor costs € 20 per day. Do not hesitate to contact me if you would like more information. What can I say .... we are waiting for you to spend many goliardic moments together to savor a mix of smells, flavors and postcard images among the waves of the Aeolian Islands, pampered by the wonderful Sicilian cuisine washed down by its splendid wines. An unforgettable holiday not to be missed !!! I wait for you on Click & Boat!

Translate
Of which 3 are in English

WONDERFULL!!!! Carlo is a LOVELY skipper, his boat is perfect. A real DREAM to visit the Almafitain coast with my family and Carlo

We enjoyed boat trip with Carlo. Everything was perfect. His catamaran is very cosy. Carlo is very experienced sail man. I'll be glad to join his crew next time. Thank you.

-
-
Edit
Select your dates
Rent by the hour
Ask for an hourly quote from Carlo.
Please note: your details will be forwarded to the owner after the yacht has been booked on Click&Boat. Meanwhile, you cannot exchange your contact information.
Your message
Make sure to specify in your message: